100 Thieves vs LG: 100 Thieves choke against Luminosity Gaming and lose 1-2, hurting their chances to qualify severely

100 Thieves continue to struggle after major roster changes. With Luminosity Gaming moving up to the 3rd position in Group A standings.

Many VALORANT fans were looking forward to this matchup. Especially due to 100 Thieves’ new roster. Bringing on JcStani and Bang, 100 Thieves were expected to do big things. Even after their finals loss against TSM in the Knights Gauntlet, fans could see their potential.

On the other hand, Luminosity Gaming is proving the power rankings wrong. They were rated a Tier 3 team and had to grind to qualify for the Main Event. this goes to show that nobody can predict which team is actually good. Nobody knows what’s going on behind the scenes in context to chemistry, skill and game sense.

Also read: The Guard defeat XSET in the NA VCT Main Event 2-1 and secure the second position in the leaderboard

100 Thieves picked Split first, to nobody’s surprise. Luminosity Gaming went on to pick Fracture which surprised everyone, with Breeze being the decider map. It was a very exciting match up.

100T Bang exploded for 27/13/4 while playing Breach and led 100t to map victory. 100T won 13-9 with Asuna having two consecutive silent maps. Luminosity Gaming could not keep up with 100T’s set-plays on this map.

The decider map proved to be the best map and why NA is one of the best regions. The game went into Overtime with Lg winning 14-12. Many fans said that 100T choked on Attack in Breeze.

Took that last match into OT and pulled out a WIN against @100Thieves GGs 2-1!! Our boys were popping off the entire match! #VCTChallengersNA pic.twitter.com/6cW1UrCfsK

Also read: Tenz secures one of the most insane knife kills to win the round for Sentinels

Effect on Group A standings and chances to qualify

The Group A standings have shifted in a huge way since this match. Luminosity Gaming moves up to the third spot with 2 wins and 1 loss.Whereas 100T with 0 wins and 3 losses stay at the 5th spot with their chances to qualify looking bleak. They need to rely on the their next two matches coming in straight wins and other teams performing bad. 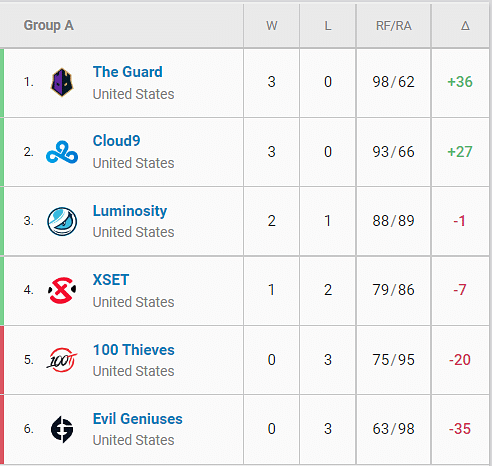